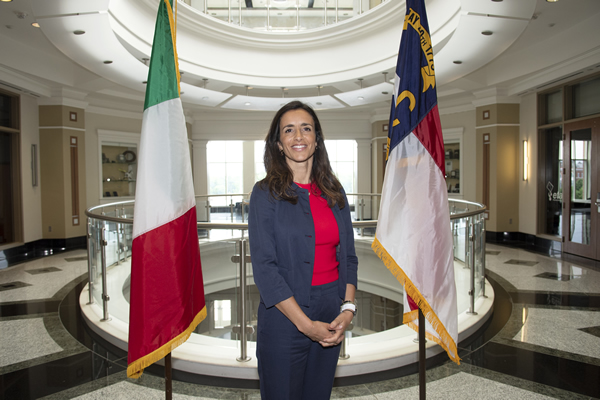 Valentina Cecchi, associate professor and graduate program director in the Department of Electrical and Computer Engineering, has been named honorary consul of Italy to the state of North Carolina.

Cecchi was appointed by the Italian Ministry of Foreign Affairs and endorsed by the U.S. State Department. The Honorary Consulate extends the network of the Consulate General of Italy in Philadelphia, which has jurisdiction over Pennsylvania, Delaware, North Carolina, West Virginia and parts of Maryland, New Jersey and Virginia. As honorary consul, Cecchi will promote economic and cultural exchange between Italy and North Carolina, assist Italian citizens facing an emergency and provide notary and passport issuance and renewal services for Italian citizens residing in North Carolina.

“I am honored to be named the honorary consul; in this role, I plan to proudly represent and support the thriving and dynamic Italian community in North Carolina, which is home to more than 120 Italian firms. I look forward to working with the Consulate General of Italy to strengthen the relationship between my native country and the United States,” said Cecchi. “UNC Charlotte’s research strengths will be mutually beneficial to bridge innovative ideas between our two countries.”

Cecchi is president of Casa della Cultura Italiana-North Carolina, a local nonprofit aimed at promoting Italian business, technology, language and culture throughout the Tar Heel state. A native of Rome, Italy, Cecchi first came to the United States as a high school exchange student. She lived with an American family in Philadelphia, Pennsylvania, where she was introduced to Drexel University. Cecchi holds three degrees from Drexel, including a Ph.D. in electrical engineering.

As a Charlotte researcher, Cecchi focuses on electric power systems, investigating how to engineer electrical grids to increase efficiency and better integrate renewable forms of energy. She also is an affiliate faculty member of the University’s Energy Production and Infrastructure Center. Offering a collaborative industry/academic partnership, EPIC produces a technical workforce and advancements in technology for the global energy industry while supporting the Carolinas’ multistate economic and energy security.

In her role with Casa della Cultura Italiana-North Carolina, Cecchi oversees the organization’s annual roundtable discussions where representatives from Italian companies and researchers and academicians from across the state gather to discuss technological advances to drive innovation in North Carolina. Among the major Italian firms in the region are Salice, LC America, PDM, Kask, Ognibene and Biesse.