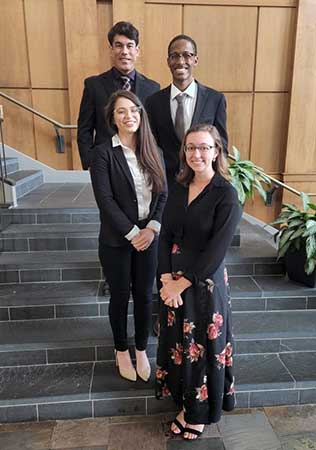 Padilla and Williams will join two other scholars from the UNC System for an eight-week immersive and experiential summer program, designed to help them develop leadership skills and gain a better understanding of key issues facing public higher education.

“As a member of the Student Government Association, I have seen firsthand how much impact our University’s advisory boards have,” said Williams. “By becoming a Marian Drane Graham Scholar, I have the chance to see what another area of governance looks like, which will make me a better student, citizen, community member and advocate for change.”

“I am excited to intern with the North Carolina Business Committee for Education in the Governor's Office,” said Padilla. “As a low-income, first-generation college student, I love this program's mission as it can open up so many doors for students like me.”

The scholars are mentored by UNC leaders, spend time in the UNC System offices in Chapel Hill, travel to UNC campuses and visit with key North Carolina policy leaders and elected officials in Washington, D.C. Additionally, scholars will develop and present a capstone project on a topic of their choosing.

The Marian Drane Graham Scholars Program is open to rising juniors and seniors; it began in 2013 and is named for the wife of Frank Porter Graham, the first president of the consolidated UNC System. The program’s namesake reflects its emphasis on pairing scholars who are passionate about education policy and public service with agencies in North Carolina. Past scholars from UNC Charlotte include Dick Beekman ’22 and Tahlieah Sampson ’21.