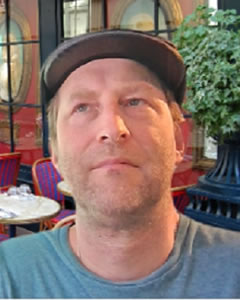 David Fillmore, a lighting designer for both theatre and dance, specializes in “large, environmental storytelling.” For example, he made fire-breathing dragons burn down a house for the Children’s Theatre of Charlotte’s production of “Dragons Love Tacos.”

While he loves “bringing imagination to life,” Fillmore knows how to make people look good — on a stage or a screen. “It’s something I do for a living,” he said.

Now, with a 2022 Innovation Corps grant from the National Science Foundation, he may soon bring that skill, and the technology that goes with it, to a Zoom meeting near you.

When the pandemic hit, and life moved to screens, Fillmore found himself staring at poorly lit faces — including his own — for hours on end.

“It bothered me that I couldn’t see people in the meetings,” he said. “And I wanted to have a little more control over how I looked.”

Fillmore also witnessed the struggles of theatre companies trying to produce well-lit virtual productions. So he came up with the idea for the Webcam Lighting Studio, a portable package of lights, plus equipment and software that range from simple DIY kits for the person who wants to look good for a virtual conference presentation to a sophisticated package that comes with a professional lighting designer.

He took his idea to the University’s Ventureprise program in fall 2021, where he said “the customer discovery process really opened up the possibilities” for his project. Finding a technical lead in Professor Asis Nasipuri, chair of the Department of Electrical and Computer Engineering, and the industry mentor Dana Hicks, of Launch LKN, he applied for the NSF I-Corp grant and has received $50,000 to further develop his product.

The National Science Foundation created the I-Corps grants to help faculty and students "extend their focus beyond the university laboratory and accelerate the economic and societal benefits of NSF-funded, basic-research projects that are ready to move toward commercialization." In addition to receiving funding support, Fillmore and his team, which includes engineering graduate student Karen Gonagur, will participate in I-Corps workshops throughout this fall.

Fillmore, who came to UNC Charlotte in 2004, has created more than 200 designs for local, national and international productions. While he has trained and worked in both scenic and lighting design, he especially enjoys creating with light.

“The light etches out everything, like a sculptor does with tools,” he said.