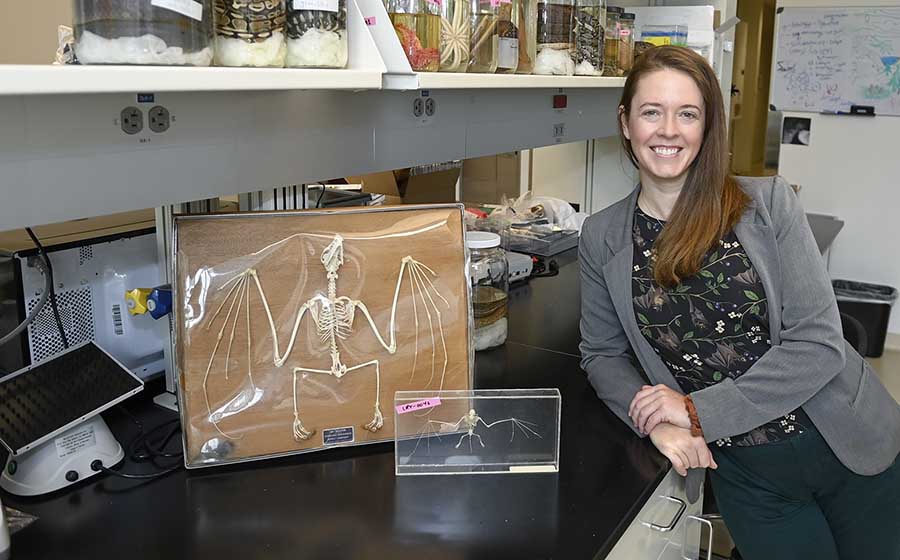 “It’s never been more important to understand how zoonotic bacteria and viruses circulate in the environment. The COVID-19 pandemic continues to teach us this.”

Bats get a bad rap. They are known to host more zoonotic viruses — those that spread between people and animals — than any other mammal species. In fact, they are the originating hosts of several disease-causing microbes, including those that cause flu and common colds. At the same time, they are essential for maintaining ecosystem health. Notably, they sustain forest health by dispersing seeds from fruit and pollinating flowers; and they control pests through daily consumption of millions of tons of insects.

“This paradox emphasizes the urgent need to communicate bats’ essential role in the ecosystem — as we work to understand their immunology and ecology, and characterize distribution of viral reservoirs at the global scale,” said Laurel Yohe, assistant professor of bioinformatics. “Bat habitats and populations need protection to minimize disturbance from humans and prevent zoonotic transfer of viruses to people or human-consumed livestock and to prevent spillover of human-evolved viruses back to bats.”

Bats carry rabies, but no more frequently than other mammals. Humans are much more likely to get rabies from cats or dogs, simply because of a higher probability of interacting with them.

Yohe, whose students eagerly accompany her in the field and lab, shares how bats contribute to a balanced ecosystem, what science is learning from them about contagious and metabolic diseases, and the existential challenges they face: