From rural Texas to the national spotlight: The making of an equity researcher

Brittany Anderson, a recent recipient of a CAREER National Science Foundation grant for her pioneering research on gifted Black girls in early STEM education, was born and raised in rural Texas. In her rise to national prominence, she has never forgotten the historical legacies of the places she came from and the ways of knowing and doing that her family instilled in her.

Growing up in rural Texas 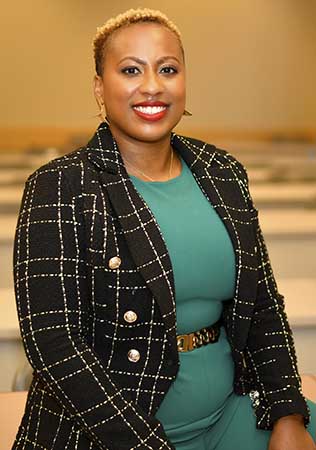 Brittany Anderson was born to a single mother in Groesbeck, Texas, a small town south of Dallas. It is where she spent the first 10 years of her life. “We didn’t have much,” she said. “It’s a rural, working-class town with limited resources, predominantly white, and was formerly known as a lynching hub.”

Anderson is the fourth generation removed from slavery, and her family is historically connected to the antebellum plantation economy in central Texas. As a girl, she spent a lot of time with her great-grandmother, who was a gifted storyteller and told her about the place she grew up. Oral tradition rooted in history was part of her early education and her family’s ways of knowing and doing.

“My great-grandmother instilled in us from an early age a sense of place and history that I have always carried with me. She was the first person who taught us about voting and impressed upon us the importance of being active in the political process,” she said.

There weren’t many opportunities for Black or Brown kids. In elementary school, Anderson was recommended and rejected for gifted education several times. Though she was a curious, bright child and talented in school, she wasn’t given the resources or opportunities to thrive.

Despite realities and limitations, self-education was an essential part of the family’s mission at home. Her mother was the first in her lineage to graduate from high school and made reading an instrumental practice in their family. They made the best of what they had by spending most of their days exploring outdoors or reading.

One of her first lessons in STEM education were culinary experiments. Each day after school, she and her cousins would go to their grandmother’s house, who dictated instructions to them as they combined the ingredients. If the finished product passed her inspection, the experiment succeeded and if not, the children would repeat it.

“When I talk about experiential learning in my research,” she said, “I’m invoking the ingenuity of those who have incredible intellectual resources, but no laboratory.  That was how we thought about our education, and what I lacked in elementary education was supplied in culturally relevant ways at home. These formative experiences in my home environment as a child are what continue to shape and drive my research to this day.”

She also had cousins at her house all the time, and as the oldest she began to educate them on various topics.

“I first fell in love with teaching and learning by being surrounded by a large extended family,” she said. “Throughout my career, my colleagues have always sought my advice on classroom management, and this comes from having a house full of cousins growing up.” 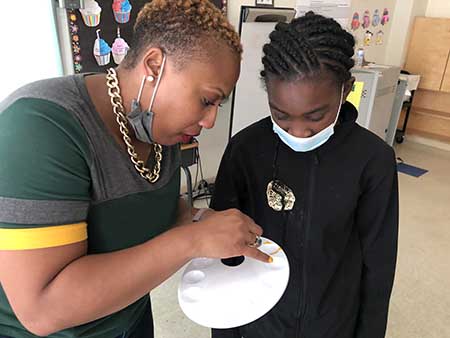 When she finished fifth grade, the family moved to Waco, where she was immediately identified for and placed in gifted education. She began to flourish in middle and high school.

In seventh grade, she received a grant from Baylor University for gifted, low-income students to attend a summer program. There they had an opportunity to study a variety of subjects not offered in their traditional schooling experiences, like STEM classes and French. It was the first transformative experience in her early schooling.

In her junior year of high school, she participated in an internship teaching low-income students over the summer, which strengthened her love of teaching and kids. Though she attended Title I schools, which are low-income and largely Black and Brown, she went on to graduate valedictorian of her high school class and was accepted to Baylor University.

After graduating from Baylor with a degree in early childhood education, she taught kindergarten and second grade in Plano, Texas, where she was inundated with challenges.
“I had students with special needs, gifted students and students who spoke English as a second language. I wanted to find ways to better meet their needs so children didn’t keep falling through the cracks in the system,” she said.
She earned a master’s in curriculum and instruction at the University of North Texas. It was during her master’s program that she first took a class in gifted education, and her research focus began to narrow.

Honing in on STEM

Since then, Anderson has spent most of her professional career as a talent development expert, working in underprivileged schools to develop creative strategies, designing programming around the arts and sciences, problem-solving and community-building. The work she does now falls under her vast talent development umbrella.

In her first position as an assistant professor in urban education at the University of Tennessee at Knoxville, she was approached by the Great Smoky Mountains Institute at Tremont, which sought her help to bring outdoor experiential learning into urban schools.

“We partnered with them and were out in the mountains doing all sorts of different things, like summer residencies and professional development. That’s when I fell in love with STEM education. The science and math projects really resonated with both the elementary students and my graduate students. And it became a highly effective way to broadly approach this work from a different angle,” she said. 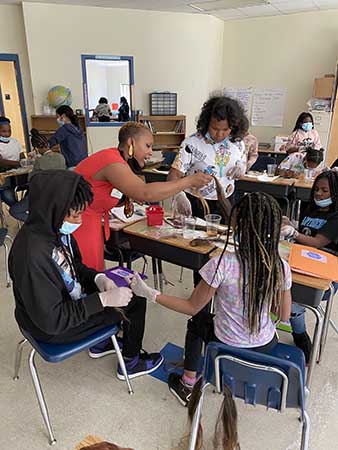 Anderson first arrived as an assistant professor in urban education at UNC Charlotte during the pandemic, and it was hard to make connections with schools to further her research goals. One of her students put her in touch with Keith Burgess, a Charlotte doctoral student and teacher at Druid Hills Academy. Anderson and Burgess immediately connected on the goals and outcomes they wanted for the students, and she began to develop a proposal.

“The purpose of the NSF CAREER grant is to really get into the weeds on a particular topic, and its goal is to start small and promote research that is very intentional with the people they’re working with to make sure that the initial model works,” Anderson said.

Because these types of programs are not yet happening in schools, the grant will fund both education and research. The research component will develop, test and refine the model by addressing specific questions, like how to insert families in the educational process and what sort of community knowledge can be exchanged between teachers and families.

The results will establish a broad framework for pipeline development, opening the pathway for more minoritized youth to be identified for gifted services and how to begin these conversations in other schools like Druid Hills.

“This is not the end,” she said. “This is where you develop, assess and refine.” When the grant funding is up after five years, she will apply for other grants to replicate the model in additional schools.

Malcolm Butler, dean of the Cato of College of Education, can relate to Anderson’s work on multiple levels. Butler grew up in a rural community in south Louisiana, and he focuses a significant part of his scholarship on science education.

“Dr. Anderson is exceptional in utilizing her lived experiences to inform her work,” he said. She integrates research and praxis in consequential ways, and the community benefits greatly from her approach.”

The project is in its early phases, but Anderson reports encouraging results. The girls have learned about synthetic hair, cosmetic science and soap-making as well as personal development, affirmations and outdoor exploration.

“They have been so engaged,” she said. “They have responded remarkably well to the identity-affirming activities. So far, in their post-program interviews, there’s strong evidence that it has meant a lot to them, they’re flourishing as a result and have begun to develop STEM identities. I couldn’t ask for more promising results. It’s a researcher’s dream.”

Before the five years of the project are up, there will be conferences, manuscripts and workshops. There will be a website platform where families can access lessons for free, too.

“It would be my absolute dream to have this in every school,” she said. “But we have to start small and expand our reach.” 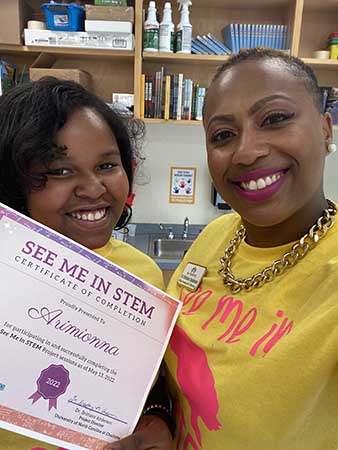 Her first research efforts were met with resistance. “I was told Black girls aren’t a substantive or large enough population, the practical applications aren’t broad enough or the work was too personal,” Anderson said.

The award by the nation’s top research agency validates her research and opens doorways for Black scholars in the future.

What she discovered in the process is that her personal experience, historical legacy and the teachings of her family is what made her competitive in these spaces, and the grant represents a commitment to community-building and service that is deeply rooted in her cultural heritage.

“The synergy and collaborative ideas I’ve been working on during my whole career, little by little, amplify the collective voice of Black girls and women. When I do this work, people tell me they experienced the same things I and others like me did, but nobody ever talks about it. Black girls and women are already doing it, but how do we get their unique voices to be heard? And so that’s what pushes the work, and me, forward.”

James McDonnell is a graduate assistant for the Cato College of Education.