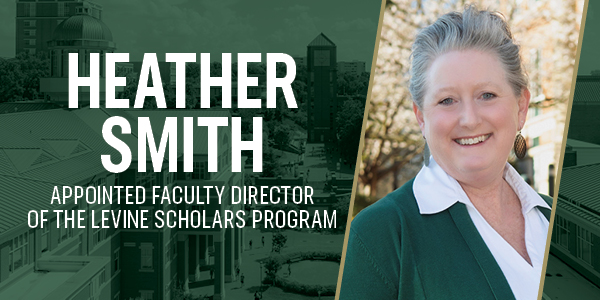 Smith served as the director of the Ph.D. Geography Graduate Program and director of the Urban Studies Minor prior to her appointment as interim chair. As the Levine Scholars Program faculty fellow, she supports three of the program’s core areas: civic engagement, research and study abroad.

“Heather has provided exceptional support to the Levine Scholars Program and its scholars for more than a decade,” said Joan Lorden, provost and vice chancellor for academic affairs. “As an effective leader and mentor, I am confident she will continue to make a significant impact on the program, while preparing scholars as leaders with a commitment to their communities.”

Smith’s research focuses on globalization, urban restructuring, immigrant settlement and socio-spatial inequality. As a community engaged scholar, her work often involves the building of inter-disciplinary and inter-institutional partnerships with colleagues across campus and throughout Charlotte.

In 2005, Smith, along with Owen Furuseth and Michael Dulin, co-founded the Mecklenburg Area Partnership for Primary Care Research, which sought  to understand and address primary care needs of disadvantaged communities in the greater Charlotte area.

Established in 2009 through a gift from The Leon Levine Foundation, the Levine Scholars Program offers standout high school students committed to academic achievement, leadership and community service a four-year scholarship to UNC Charlotte. The scholarship covers tuition, housing, meals, books and mandatory fees. Beyond the financial award, Levine Scholars benefit from study abroad opportunities, professional networking, personalized mentorship, priority course registration and professional development resources. A unique feature of the program is the community service grant that each scholar receives to create a positive impact in the Charlotte community.