Bonded for the Future

Niners across North Carolina are talking about the importance of the Connect NC bond to UNC Charlotte. With $90 million for a new science building at stake (for the UNC system’s fastest-growing campus), students, alumni, the chancellor and even Norm have gotten into the act.

For most students, 2016 is their first presidential election. Once again, the University’s 49er Democracy Experience joined forces with TurboVote to host a campus voter registration drive.

Volunteers staffed voter registration sites at the Prospector, Atkins Library and the Student Union, talking to students about the election process and helping them register. 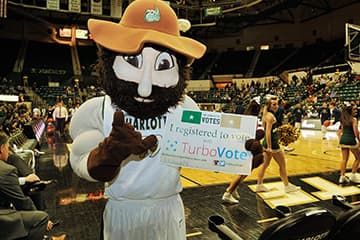 Adriana Hernandez (’16), a senior double major in political science and international studies, was part of the action. "I'm excited to vote because not only is it my first adult decision away from home, it is the first election I’m able to participate in.”

Charlotte 49er alumni are spreading the message across social media with posts, tweets and likes encouraging fellow alums to find out more about the Connect NC bond. Stephen Steiger (’04), Alumni Association president, is helping lead the charge. "The Charlotte 49ers Alumni Board members are gearing up for the final days before the election telling friends and neighbors to learn more about the bond. Chancellor Dubois says it’s vital to our continued growth as a University.”

They’ve shared the business case for the bonds: investing while interest rates are low, protecting the state’s Triple A bond rating and paying for 50-year investments in 20 years without a tax increase.

And it has been well-received, with many showing overwhelming supporting for the Connect NC bond. The Charlotte Observer Editorial Board gave a strong endorsement, Michael Lutes, president of Carolinas HealthCare System’s southeast division, lent his support through the Anson County Record, as did Mitchell Community College President Tim Brewer in a letter penned with Chancellor Dubois appearing in the Mooresville Tribune and the Statesville Record and Landmark. 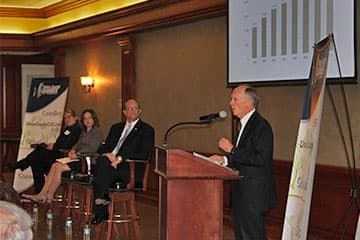 “North Carolina has grown by 2 million people since the 2000 bond campaign, and enrollment at UNC Charlotte increased 76 percent during that same period.”

“Fifty percent of our students with declared majors are in STEM fields (science, engineering, technology and math). Without this new science building, UNC Charlotte will not be able to provide the talent for the region’s health care, energy and advanced manufacturing industries.”

What can you do?

Not registered? You can still register and vote in the March 15th election.