Legislators heard an update from Chancellor Dubois and rallied around the 2017 legislative priorities: funding for enrollment growth, faculty recruitment and retention, an increase in management flexibilities and salary increases for University employees. 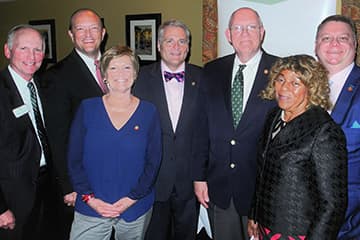 The University is requesting $15 million to keep up with enrollment growth. UNC Charlotte has seen a 33 percent increase in enrollment over the past 10 years and will exceed 29,000 students in fall of 2017. The University also accounts for 50 percent of the entire system’s growth since 2009. 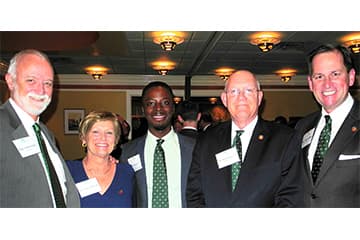 The University also is seeking $3 million for the Faculty Recruitment and Retention Fund. Over the past 10 years, 75 outstanding UNC Charlotte professors and researchers were recruited with these funds, including Dr. Steve Ott. Previously the director of the Childress Klein Center for Real Estate, Ott is now the dean of the Belk College of Business and has raised nearly $30 million in private funding. Another example is Dr. John Ziegert, who was recruited from Clemson University in 2009 and is the 2017 recipient of the Society of Mechanical Engineers prestigious international research award.

Increasing the carryforward authority from 2.5 percent to 5 percent and increasing approval authority from $300,000 to $1 million will result in greater efficiency and savings, allowing UNC Charlotte to address critical campus repairs and renovations. These include roof repairs to campus buildings, improvements to South Entrance, elevator replacement in Reese Building and HVAC upgrades in Burson Hall.

As an alumnus, friend or supporter, you can help by educating and advocating for UNC Charlotte with the N.C. General Assembly. Do you know any of the legislators featured in the article?  Are you willing to contact them when an issue arises? Please email Betty Doster, special assistant to the chancellor.