A lasting legacy. This story is part of a series demonstrating the achievement, impact and growth of UNC Charlotte under the leadership of Chancellor Philip L. Dubois.

Most people know UNC Charlotte Chancellor Philip L. Dubois as a longtime leader in academia who has shepherded this nearly 30,000-student university through exponential growth over the past 15 years.

But what most don’t see is how he has quietly helped cultivate the next generation of leaders: Chandler Crean, Niayai Lavien and Tracey Allsbrook. Each served as student body president during Dubois’ tenure, and each considers him a mentor.

Dubois helped steady an emotional Allsbrook when she had to confront a culturally insensitive incident during her administration. He assisted Lavien in navigating controversy surrounding the proposed renaming of the football stadium. And the strength and compassion he displayed through the darkest days of UNC Charlotte’s history have influenced Crean to consider a career in higher education.

For these young leaders, Dubois provided a shoulder on which to lean and an ear to listen, even during his busiest days.

“Chancellor Dubois was great at listening to the concerns I brought forward and trusting my leadership,” Lavien said. “He also trusted student leadership, especially through the Student Government Association that he often worked alongside.” 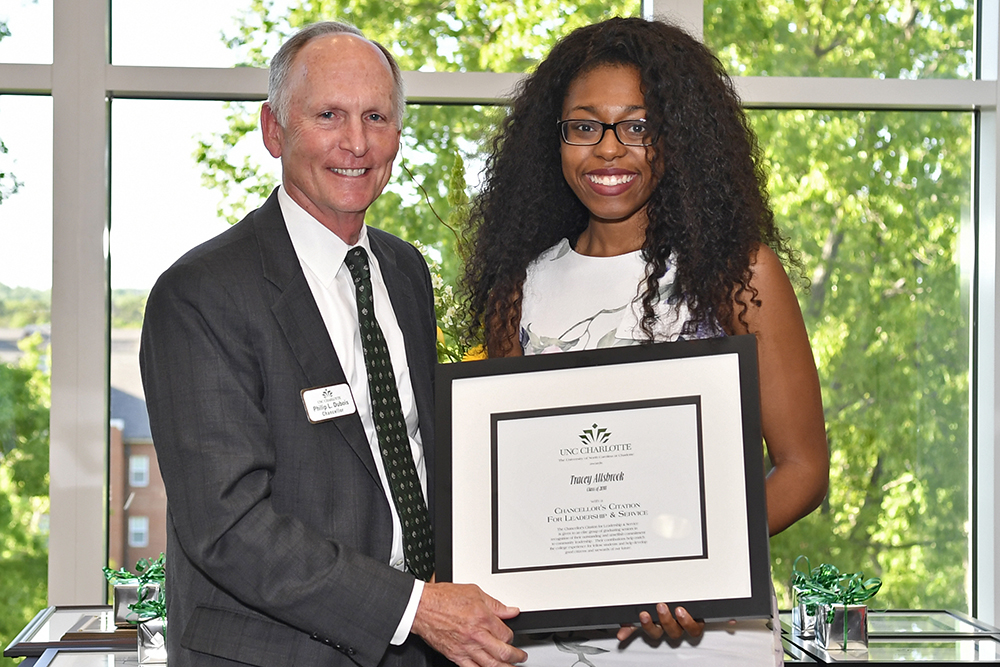 An incident occurred in one of the residence halls during Allsbrook’s administration that upset her and other students.

“The incident involved a student who had not been properly educated about different cultures,” said Allsbrook, who earned a degree in communication and media studies. “At the time, it was hard for me to understand. The student is on a campus with so many cultures and people from various backgrounds. How could they be so insensitive? I was fully prepared to act off emotion.”

But Allsbrook said the chancellor caused her to reconsider.

“The Chancellor reached out and explained that this could be a learning opportunity for the student, that fueling hate with hate would only perpetuate hate,” she said. “I called an emergency meeting with my cabinet and we were able to create programming around educating students about different cultural backgrounds. It was a lesson on understanding that no matter your environment, everyone may not have the same level of knowledge.”

Allsbrook, the awards program coordinator for Sports Business Journal/Daily, said the best advice the chancellor gave her as student body president was to always remember why she sought the job.

“That kept me grounded throughout my tenure,” she said. “To this day, no matter what I get involved in, I have to remember my why.” 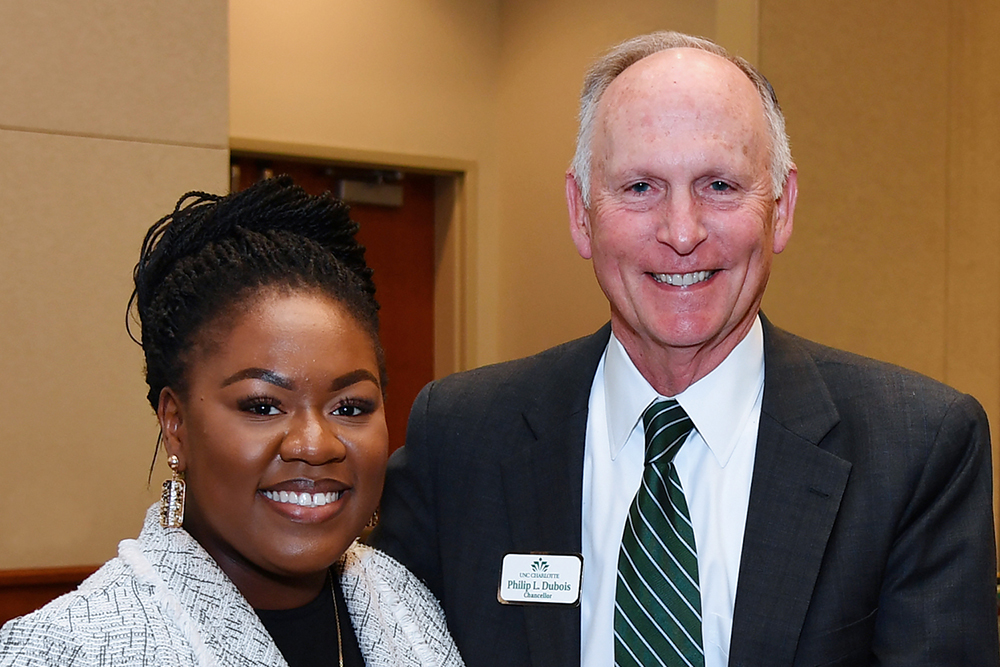 Lavien struggled with a difficult issue that reared its head during her tenure: whether to rename Jerry Richardson Stadium following allegations of harassment against the former owner of the Carolina Panthers.

“That was a particular instance where I had to ask tough questions and raise student concerns before they were clearly defined,” recalled Lavien, a political science major who recently worked as an organizer for Elizabeth Warren’s presidential campaign. “At the end of it, I think the chancellor was able to hear my concerns, address them, and we were able to find ways to have productive dialogue about an issue that would impact the University and its students. I was being incredibly thoughtful of the student impact of University choices, and Chancellor Dubois was able to help me find ways to make sure that the student voice was being heard in a decision that I was making on their behalf.”

In helping her navigate that issue, Dubois displayed what Lavien says are among his best assets as a leader: he is focused, detail-oriented and a great listener.

“Chancellor Dubois was always available to communicate and think about what would be best for current students and future students,” she said. “He is great at asking tough questions, communicating with several people and groups at once and leading the University through good times and incredibly challenging ones.” 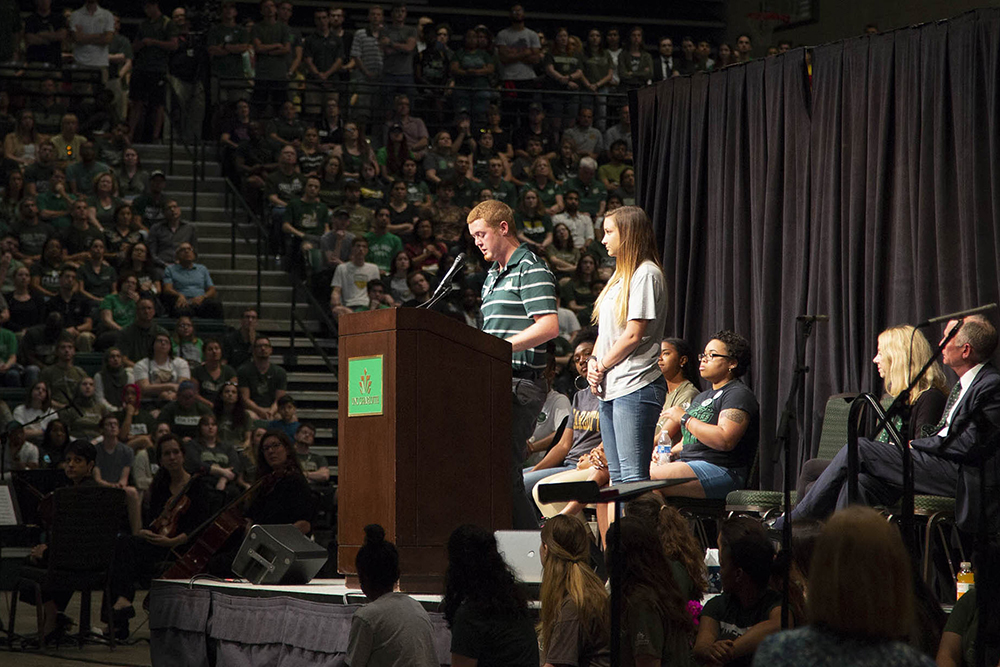 Just weeks after Crean was sworn in as student body president, a campus shooter killed two students and injured four others. There were many instances in the days following that tragedy where Crean was standing next to Dubois as he consoled a grieving campus community.

Crean said Dubois has shown him by example how to lead with resilience, confidence and respect, as well as how to engage and support students on a large scale.

“The biggest thing I learned was what to do moving forward in trying to pull the student body back together in support of everything going on,” Crean said.

Crean said he already felt a kinship with Dubois because both are first-generation college students. That bond has deepened over the past year.

A business management major, Crean has asked himself recently whether he can see himself in Dubois’ shoes.

The answer is yes. Crean, who will graduate in May, said he plans to pursue a graduate degree in higher education in the near future.