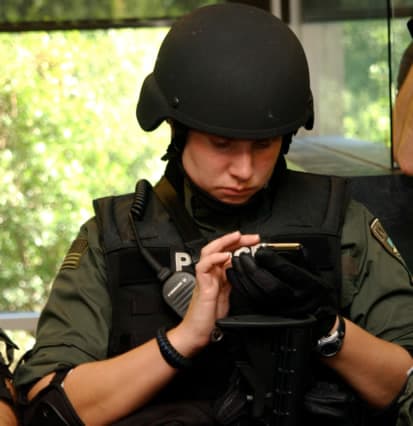 On Friday, the University staged a training exercise to test enhanced methods of responding to threats on campus. Since then, coverage of the event has resulted in widespread local and national media attention.

As part of the exercise, the Department of Risk Management Safety and Security partnered with the College of Computing and Informatics’ (CCI) Visualization Center to test a federally funded Effective Emergency Response Communication (EERC) system.  Developed by UNC Charlotte researchers, the system determines the locations of first responders within buildings through a Smartphone and improves situational awareness and safety.

Charlotte-area media, including the Charlotte Observer, News14Carolina, WBTV, WCNC and WSOC, were on hand to observe the technology in action during the exercise. Officers from the University’s Police and Public Safety Office acted as first responders during the simulation.

Command center personnel during the exercise were able to monitor and re-route first responders once they plotted their precise location within Atkins Library using a digital map on a touch screen-enabled Smartphone.  The July 27 simulation provided a sufficient scenario needed to test the use of the EERC and to allow University researchers to evaluate it.

Following local coverage, news of the simulation appeared in national outlets, such as the San Francisco Chronicle and the New Orleans Times-Picayune.