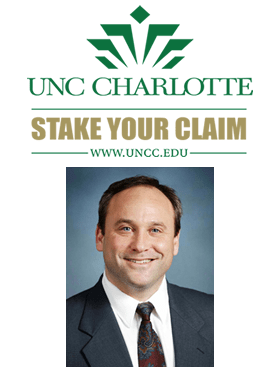 Steven Rogelberg has been appointed the inaugural University Professor of UNC Charlotte. The title recognizes outstanding scholarly achievement in a professional field as well as demonstrated ability to excel at interdisciplinary research, teaching and service. The University Professor is recommended to the Board of Trustees by the chancellor and holds this title for life.

Described as a “visionary leader” and a “scholar of the highest caliber,” Rogelberg defines what it means to be a University Professor, said Provost Joan Lorden in announcing the award.  “He has expanded interdisciplinary research and education, brought international recognition to the University and extended the impact of his research through engagement with nonprofit agencies in the community.”

Rogelberg joined the University in 2003 as an associate professor in the College of Liberal Arts & Sciences Department of Psychology; he was promoted to professor in 2006.  Currently, he has a joint appointment in the departments of Psychology and Management as well as affiliate appointments in organizational science, communication studies and sociology.  In 2005, he became director of the organizational science doctoral program and founder and director of the Organizational Science Consulting and Research Unit.

As a researcher, Rogelberg has published more than 70 scholarly works and has been invited to present 50-plus colloquia, addressing issues such as team effectiveness, leadership, health and employee well-being, meetings at work and organizational research methods. He has held guest or visiting scholar positions in Canada, Israel, Belgium, England, Germany, Italy and Switzerland.  Rogelberg’s work is accessible to audiences beyond academia.  His research has been profiled on public television, radio and in leading national and international newspapers and popular science-based magazines.

During his time on campus, Rogelberg has demonstrated the academic competence and leadership ability necessary to manage cross-disciplinary research, teaching and service activities across four academic departments.  According to Linda Shanock, associate professor in psychology and associate director of organizational science, students and faculty in the program “feel a strong identity and sense of community…and are highly successful despite having to overcome issues of lack of co-location.…Dr. Rogelberg’s commitment to the program and competence as an interdisciplinary leader are what make the success of the program possible.”  The doctoral program boasts high retention and graduation rates, high rates of full-time employment for graduates and high faculty and student satisfaction.

As founding director of the Organizational Science Summer Institute (OSSI), an inclusion-based initiative, Rogelberg seeks to diversify the field of organizational science through the professional development of advanced undergraduates interested in pursuing a doctoral degree in organizational science.  OSSI specifically targets historically underrepresented undergraduates students to participate in a research-driven institute for a week during the summer.  The institute has enrolled greater than 40 students since its inception in 2009.

Known for his commitment to community engagement, Rogelberg oversaw the creation of the Voluntary Assessment Program (VPA), a campus-based outreach initiative that provides free volunteer management services to 100-plus regional nonprofit organizations.  He also co-founded the Shelter Diagnostic System, an organizational-development system used to help animal shelters run more effectively. Animal welfare organizations around the world—which only pay for expenses—have benefited from this service, and Rogelberg often involves graduate students in running the program.

“Steve is one of the most entrepreneurial individuals I know,” said Nancy Gutierrez, dean of the College of Liberal Arts and Sciences in which the Organizational Science Program is structurally housed. “He is not satisfied in simply addressing a need but in designing an amazing solution that challenges the intellectual capacities of everyone involved.”

According to his peers, Rogelberg is a generous, dependable and humble colleague who “operates every aspect of his life with a strong moral and ethical compass.”