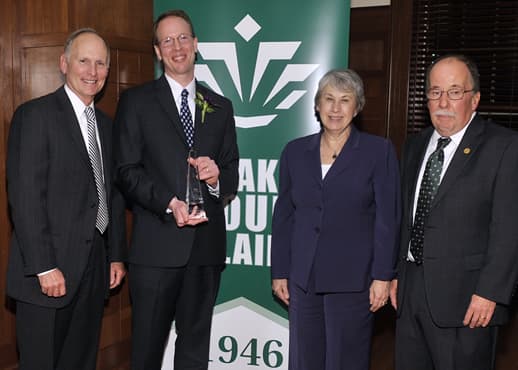 Ryan Kilmer, professor of psychology, is the 2014 recipient of the Harshini V. de Silva Graduate Mentor Award; he was honored at a special ceremony Tuesday, Feb. 18, at the Harris Alumni Center at Johnson Glen.

A clinical-community psychologist, Kilmer is focused on improving the lives of children, especially those who are at-risk for emotional, behavioral or academic difficulties. He is co-director of the Community Psychology Research Lab, where he works collaboratively with colleagues, graduate students and community partners on various grant-funded projects to improve the well-being of children and families, as well as youth and adolescents transitioning into adulthood, in the greater Charlotte region.

In presenting the honor, University leaders noted Kilmer’s mastery of mentoring and the importance of positive relationships between faculty and graduate students.

“As a mentor, Dr. Kilmer is there for his students,” said Nancy Gutierrez, dean of the College of Liberal Arts & Sciences. “He provides them support on an ongoing basis. He bolsters them when they struggle and during periods of self-doubt. Throughout their time together and beyond, Dr. Kilmer remains positive and supportive.”

In the words of one student in support of Kilmer’s nomination, “I personally witnessed and benefited from Dr. Kilmer’s tireless efforts to push his students to reach and exceed their goals. … He was undoubtedly one of the most sought-after mentors, a source of infectious enthusiasm and a model academician.”

Kilmer, who earned a doctorate in psychology with specializations in clinical and community psychology from the University of Rochester in 1999, joined UNC Charlotte that fall as an assistant professor. He was promoted to associate professor in 2005 and full professor in 2012. From his first semester on campus, Kilmer cultivated a reputation as a scholar, researcher and mentor. His efforts with students extend beyond their graduation; he remains a resource for his students as they transition into colleagues.

The de Silva Award honors its namesake, an exceptional teacher, brilliant scholar and researcher and devoted servant of her profession and community until her death in October 2000. It is given annually to the faculty member whose commitment to students, research and scholarly inquiry most closely exemplifies the spirit of de Silva.

A list of past recipients is available on the Web.