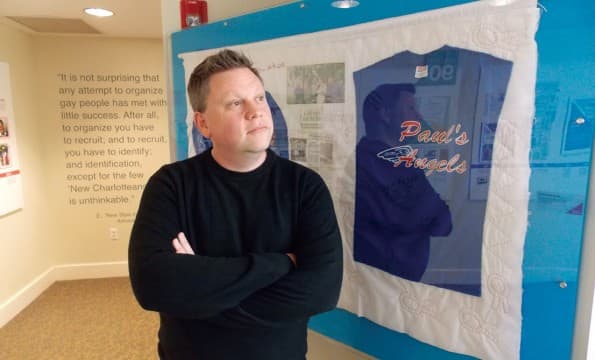 The Charlotte-based LGBT arts, entertainment and news publication qnotes recently named Josh Burford, assistant director for sexual and gender diversity in the Multicultural Resource Center, as its “2014 Person of the Year.”

The recognition stemmed from Burford’s extensive campus and community involvement, and in particular, his outreach initiatives related to the establishment of a community LGBTQ historical archive in UNC Charlotte’s J. Murray Atkins Library Special Collections.

History and artifacts collected for the University’s archive evolved into a timeline exhibit from the 1940s to present entitled “Publicly Identified: Coming Out Activist in the Queen City.”  The exhibit is on display through Sunday, Jan. 25, as part of the Levine Museum of the New South’s first-ever LGBT exhibit “LGBTQ Perspectives on Equality," which opened July 25.  Burford’s work and the museum’s efforts have garnered local and national accolades and media attention.

Matt Comer, qnotes editor, wrote, “Burford’s leadership on [LGBTQ] issues has been recognized once already this year. Readers who participated in this newspaper’s annual QList – Best of LGBT Charlotte voted him 'Best LGBT Leader.' But that distinction doesn’t adequately qualify the level to which Burford’s accomplishments — despite his short time in Charlotte — have helped to transform local community conversations, priorities and history. And it’s all this work and commitment — at the archive, on his campus and everywhere in between — upon which qnotes is proud to name Joshua Burford our 2014 Person of the Year.”

Since arriving at UNC Charlotte in 2012, Burford has expanded the Multicultural Resource Center’s SafeZone program as well as initiated QY1 (Queer Year 1), a first-year initiative to help students connect with campus and community LGBTQ resources.  He works with LGBTQ students and student groups, as well as on campus-wide inclusivity initiatives such as the Trans* Committee, and teaches LGBT studies.