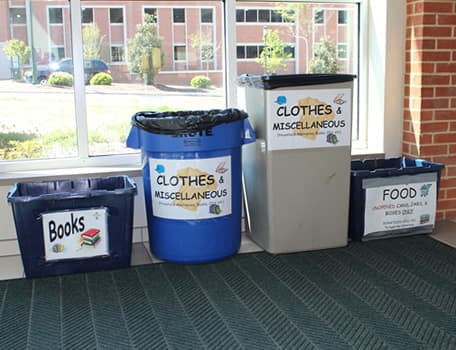 Toward the end of the academic year, as students prepared to depart residence halls for home, the Office of Waste Reduction and Recycling implemented operation “Move Out.”

During the past month, the office encouraged residence hall dwellers to consider donating unwanted, serviceable items rather than just throwing everything into the trash. As part of the “Move Out” program, bins were placed in residence halls to collect items for the Salvation Army and Goodwill, and unwanted nonperishable food items went to the Niner Pantry.

“This year, we were able to repeat the success we had last year and collect more than 10,000 pounds of items for donation,” said Lee Arnold, a crew supervisor for the Office of Waste Reduction and Recycling.

According to Shannon Caveny-Cox, recycling coordinator, “Move Out” has become an important program across campus, and it is a display of the University’s progressive stance with regard to encouraging a more responsible, sustainable community. Waste reduction and recycling works with parking and transportation services and housing and residence life to deploy “Move Out,” which enables the University community to divert waste destined for the landfill into commodities that can be reused by members of the greater region.

The Office of Waste Reduction and Recycling is making plans for its annual “Move In” effort in August, when teams will work to divert massive amounts of cardboard, Styrofoam and other packing materials used by incoming resident hall occupants.