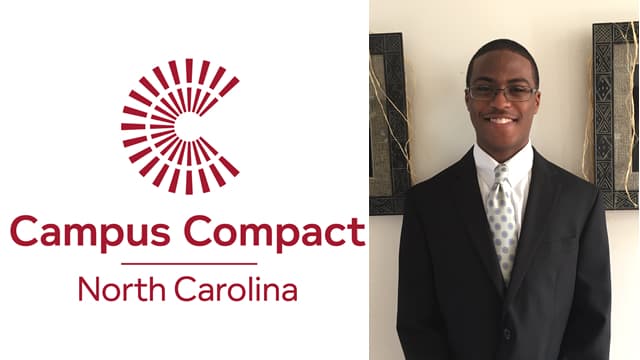 North Carolina Campus Compact, a statewide network of colleges and universities with a shared commitment to civic engagement, has recognized UNC Charlotte student Sean Myhand for outstanding leadership and service. He is one of 25 recipients of the organization’s Community Impact Award, which honors one student leader at each member institution of the network.

Myhand and the other award recipients were honored at the compact’s annual student conference, held Nov. 12 at UNC Asheville.

A Charlotte native, Myhand is a junior majoring in computer science. Since his first year at UNC Charlotte, he has supported the work of the Jamil Niner Student Pantry. He began as a volunteer and now is a leader of the on-campus food pantry, which has served more than 1,600 students who struggle with food insecurity. Myhand established an official student organization to manage the pantry, developed a website and social media platform and trained volunteers. He also built partnerships with on-campus groups, such as the Student Philanthropy Council (where he serves on the board) and with off-campus sponsors, including Bank of America, TIAA and the State Employees Credit Union.

At the conference, more than 160 students and staff from 24 campuses participated in student-led workshops on diverse community engagement topics. There also was a showcase of organizations working for social change, including the Campus Kitchens Project, Rachel Carson Council and the Sustained Dialogue Institute.