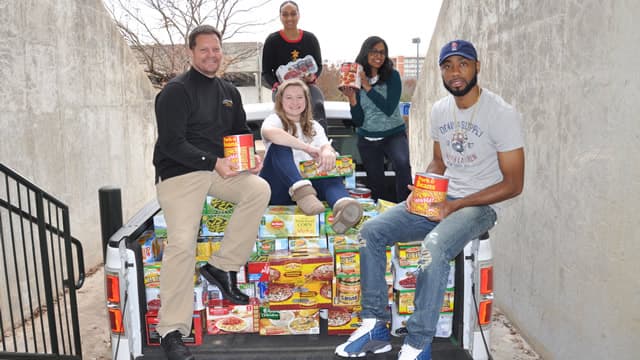 UNC Charlotte’s Sports Clubs program won the second “First in Flight Fight Against Hunger,” a statewide competition to collect canned food to assist community organizations that serve those in need.

Participating athletes of sports clubs at the University collected more than 3,100 pounds of nonperishable food items, which they donated to the Jamil Niner Student Pantry. Located at 1224 John Kirk Dr., the pantry provides assistance to UNC Charlotte undergraduate and graduate students that struggle with food insecurity. To qualify, students must live off campus and not have a meal plan.

Eight universities across the state competed in the “First in Flight Fight Against Hunger” contest. UNC Charlotte won the inaugural event held in December 2015.

Organizers noted the purpose of the competition was to promote cooperation and teamwork in an attempt to make a difference for North Carolina communities.