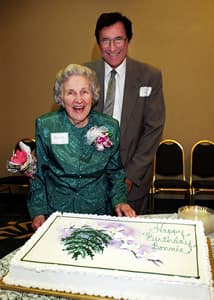 Loy H. Witherspoon, professor emeritus of philosophy and religious studies at UNC Charlotte and a longtime confidant to University founder Bonnie Cone, passed away on Sunday, Jan. 15, in his home.

The founding chair of the Department of Religious Studies, Witherspoon retired in 1994 after 30 years of distinguished service at the University. For more than a decade after his retirement, he continued to teach at UNC Charlotte and he remained active in a range of community and academic service projects.

“Loy was truly a legendary teacher and a mentor to his colleagues and scores of students, and he was one of the most active members of the campus community,” said UNC Charlotte Chancellor Philip L. Dubois, who had known Witherspoon since the early 1990s when Dubois was UNC Charlotte's provost.  “He was a much-loved colleague who always had time and a kind word for anyone. Lisa and I will miss him very much.”

The Loy H. Witherspoon Lecture in Religious Studies began in 1984 in honor of   his 20th anniversary and is now the University’s oldest and most prestigious endowed lecture series.

At an unveiling of Witherspoon’s portrait in the Harris Alumni Center at Johnson Glen, Dubois recalled when Cone “recruited Loy Witherspoon, she was looking for a builder – and a builder she got.”

Cone assigned him the tasks of building programs in philosophy and religious studies. She also asked him to create an organization to coordinate the work of campus chaplains and student religious organizations. The new organization was called the Office of Religious Affairs.

A 1969 recipient of the University’s highest recognition for teaching, the Bank of America Award for Teaching Excellence, Witherspoon was described as a great teacher, caring counselor, skilled ombudsman, host, patron, politician, public relations practitioner and troubleshooter. Witherspoon also served as college chaplain and on practically every University committee.

Under his leadership, the Department of Religious Studies grew from a handful of courses to a full-fledged degree program. Witherspoon also was instrumental in establishing campus governance. He was the first chairperson of the University Senate, twice served as president of the faculty and was University marshal from 1988 to 1993.

“Loy Witherspoon embodied the values and aspirations of UNC Charlotte,” said Nancy Gutierrez, dean of the College of Liberal Arts & Sciences. “All of his efforts have gone to creating the University of the future. The University of the 1960s and 1970s was a pretty small, parochial kind of place. Yet, in his mind, Loy never worked in that small place. He always has had ambitions for UNC Charlotte, and so his work even in the early days was predicated on its becoming the great institution it is today.”

“He was instrumental in bringing endowed professorships to the University,” Gutierrez said. “The University’s first named, endowed lecture series bears his name. Hundreds of Loy’s friends, colleagues and former students showed their love and respect for Loy by creating the fund in his honor in 1984, and he faithfully continued to support and attend these important community lectures.

“Witherspoon showed his dedication to students in deep, lasting ways,” she said. “He was the mentor and supporter of many students. He brought the fraternity system here and was a mentor to those students and sent them off into the world prepared as scholars and as people. He was this amazing teacher. He had a vision but he was also very practical. Sometimes he gave students money out of his pocket. He gave scholarships. He was always interested in the physical and spiritual well-being of the students.”

Gutierrez counts Witherspoon as a mentor and inspiration. “I am so glad I had the opportunity to know him,” she said. “If there is nothing else I have gained from moving to UNC Charlotte, knowing Loy Witherspoon is one of my greatest personal benefits.”

Since his formal retirement in 1995, Witherspoon remained engaged with the University and the awards and accolades continued to come.

In 2001, he received the Distinguished Service Award from the UNC Charlotte Board of Trustees. That same year, the University chapter of Lambda Chi Alpha, for which he had served as faculty adviser, endowed a scholarship that bears his name for a religious studies major.

The Loy H. Witherspoon Greek Alumni Scholarship was established in 2012 to honor the work done by Witherspoon to establish the current Greek system at the University. It is used to provide scholarship assistance to undergraduate members of UNC Charlotte fraternities or sororities.

Witherspoon received the Alumni Association's Distinguished Faculty Award in 1993 and the Alumni by Choice Award (now called the Honorary Alumnus(na) Award in 1995. Witherspoon Hall, a 420-bed residence facility, opened in 1990 and has long been the home for students in the University’s honors program.

Witherspoon, who also was an ordained minister in the United Methodist Church, earned his bachelor and divinity degrees from Duke University and his doctorate from Boston University.

Witherspoon grew up in Winston-Salem in the Methodist Children's Home after both his parents died when he was a small child. Following his Duke education, Witherspoon went to teach philosophy and religion at the American University in Cairo, Egypt.  There he met his lifelong friend and companion, William Pfischner, M.D.