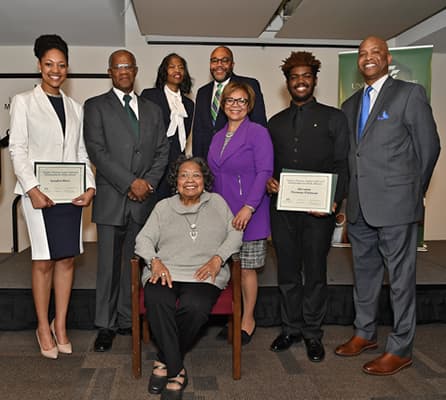 Two College of Liberal Arts & Sciences students have received the first Harper-Thomas Legacy Endowment for Study Abroad awards, presented during an event at the Levine Museum of the New South hosted by the UNC Charlotte Black Alumni Chapter.

The Harper-Thomas Legacy Endowment for Study Abroad honors College of Liberal Arts & Sciences emeritus professors Mary Harper and Herman Thomas. When they arrived at UNC Charlotte in the 1970s, the winds of social and political change still lingered in the air, and hundreds of first-generation students were embarking upon an educational and intellectual journey for which they were surely excited if not unprepared.

Working within classrooms, the halls of University administration and Charlotte’s boardrooms and churches, these professors spent more than 30 years helping to recruit, educate, prepare and retain talented but often underserved students. The goal of the Harper-Thomas Legacy Endowment for Study Abroad is to honor its namesakes' contributions by preparing students in the College of Liberal Arts & Sciences (CLAS) to be competitive and successful beyond graduation. The award is a CLAS scholarship.

“This is a time in my life where I am not as young as I used to be, but I am also not as old as I could be,” said Thomas, professor emeritus of religious studies, addressing a crowd that included many of his former students. “I always had your future in mind and the future has come. Continue giving on your journey from ordinariness to greatness and thank you for allowing me to be a part of your life.”

DeVante Thomas-Pittman and Kendra Shaw were the first two recipients of this annual merit-based award, which supports students’ international educational experiences with preference given to self-identified first-generation college students from underrepresented populations. Thomas-Pittman is a sophomore who is majoring in Spanish and German with a minor in Italian. He will study abroad in France this summer. Shaw is a junior biology major who is minoring in psychology and will study abroad in South Africa this summer.

“This night is certainly an honor for Dr. Thomas and myself,” said Harper, professor emerita of English. “I have met the recipients of this year’s award, and I am quite impressed with them.”

Charlotte Mayor Vi Lyles attended the event to congratulate and honor Harper and Thomas. “There is no better way to end my day than to be here to honor two people who have given so much to this community,” she said. “Dr. Harper and Dr. Thomas poured life experiences into their students.”

She also told the alumni in attendance that their ability to attend and graduate from UNC Charlotte is one of the reasons Charlotte is such a great and growing community. “You have made it possible for students to follow you, and you have honored those who came before you.”

The UNC Charlotte Black Alumni Chapter’s mission is to support participation in University life and to promote the education of current black students through scholarship opportunities, mentoring and community outreach. The chapter also enhances black alumni participation through networking, communication and program development.