German official to speak about fall of Berlin Wall 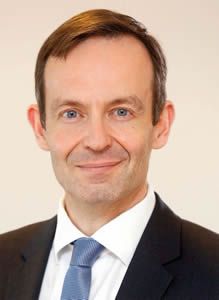 Volker Wissing, chairman of the Free Democratic Party (FDP) and vice minister president of Rhineland- Palatinate, will present “The 30th Anniversary of the Fall of the Berlin Wall: 1989—The End of History? Learning from History to Succeed in the Future” at 3 p.m., Monday, Nov. 4, in the Barnhardt Student Activity Center, Salon A, as part of the 2019 International Speaker Series.

Born in Landau, Germany, Wissing is a lawyer and politician in the Free Democratic Party whose career began in 1989 when he studied French law at the Universities of Saarbrücken and Freiburg im Breisgau, completing his degree in 1996.

Wissing was appointed head of the Opposition Office of the Special Waste Management Company (SAM) GmbH in Mainz in 1996. He joined the judicial service of the state of Rhineland-Palatinate as a judge in the district court of Zweibrücken (large criminal court) in 1997.

From 1997-99, he was a prosecutor and later appointed judge at the District Court of Landau in the Palatinate; from 2000-04, he served as the personal referent (second) of the Minister of Justice of Rhineland-Palatinate, Herbert Mertin (FDP), and from 2004 to 2013, he served as a member of the German Bundestag and interim chairman of the Finance Committee of the German Bundestag, where he dealt with German tax legislation and issues of banking and capital markets law.

Wissing has worked to promote free markets and privatization, alongside pro-business internationalism. His time as minister of economy, transportation and agriculture provided him with expertise on the political process behind negotiating trade agreements and led to the founding Wissing Lawyers, a leading law firm and expert in the area of inheritance law and estate succession.

Faculty members are encouraged to reserve space to attend with their classes and/or arrange for an extra-credit sign-in sheet for students; email globaleducation@uncc.edu. Individual RSVPs are requested.

The Office of International Programs, the World Affairs Council of Charlotte, Atkins Library, the Department of Global Studies and the North Carolina Zeitgeist Foundation are sponsoring this International Speaker Series event.