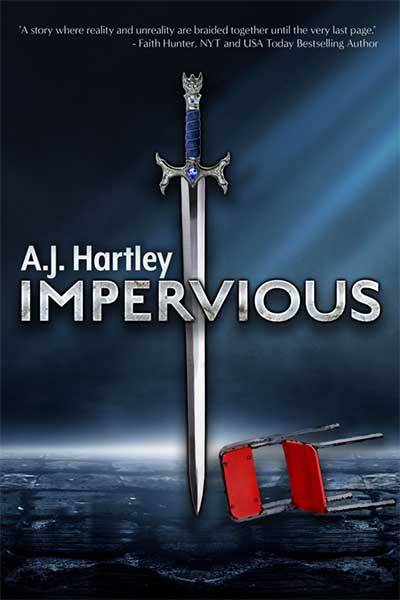 On April 23, Andrew Hartley, the Robinson Distinguished Professor of Shakespeare Studies in the Department of Theatre, will have his 23rd book, “Impervious,” published.

Hartley is an internationally respected Shakespeare scholar and an expert, in particular, on Julius Caesar. Outside of academic circles, though, he is better known as A.J. Hartley—or in some cases Andrew Hart—a New York Times best-selling author of mystery, thriller and fantasy novels for children and adults.

“Impervious,” published in the United States by Charlotte-based Falstaff Books, is a young adult fantasy that shares similarities with earlier work. Like Darwen Arkwright and the Peregrine Pact, named the 2012 Southern Independent Bookseller Association Young Adult Novel of the Year, the book’s protagonist is yanked out of the ordinary “real” world and thrust into a monster-filled world of magic and mayhem. Like Steeplejack, which won the 2017 International Thriller Writers Award for “Best Young Adult Novel” and the 2017 Manly Wade Wellman Award for North Carolina Science Fiction and Fantasy (among other accolades), the protagonist is a brave and intelligent young woman.

Unlike any previous novel, however, “Impervious” is a response to a real-world event of profound and personal gravity to Hartley and the Charlotte community.

“On Tuesday, April 30, 2019, I was on the campus of the university where I teach—UNC Charlotte—for an end of year celebration honoring graduating seniors, when a gunman opened fire in a neighboring building,” Hartley writes in an afterword to the book. “I took cover with a group of students in a theatre dressing room and we locked ourselves in…By the time we got the all-clear from the police, two students had been killed and several others seriously wounded. The scars borne by the survivors are less easy to quantify.”

Hartley said that he had been considering a story about a school shooting for years. The event on April 30 and his accompanying emotional journey, “how calm I was through the experience,” followed by, for example, panic attacks in the Harris Teeter, focused his attention on the topic. Dealing with the real-world issue of gun violence through his distinctive brand of literature became necessary.

In spite of the intense seriousness of that issue, Hartley said, “It doesn’t feel like an issue book until the very end. It feels like a fantasy-adventure.” Trina Warren begins the novel as a regular student navigating her high school classes, unaware of the fact that before the final bell rings, she will have to defeat the “Soulless One” to save herself and her friends.

“Impervious” is dedicated to Reed Parlier and Riley Howell, the two students who were killed in the April 30 shooting. In the midst of the fantasy approach, Hartley said, the book is very clear and “very realistic about what that kind of heroism means.”