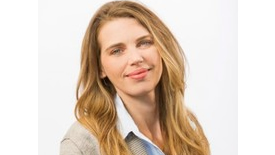 Shanyn Viars found her dream job in a nontraditional field.

After earning a Master of Science in Economics from UNC Charlotte’s Belk College of Business, Viars was hired as an economic and policy research associate and the only economist on staff at American Rivers, a conservation organization based in Grand Rapids, Michigan.

“I wanted to use my degree to change public policy and, particularly, clean water — it is the backbone of a healthy community and society,” said Viars ’15, ’16 M.S. “As an economist, I help communities weigh sustainable options and foster innovative financing structures that will be needed to address our urgent water challenges.”

Viars is one of a growing number of Belk College M.S. in Economics graduates who are pursuing a nontraditional economics career.

Economics Professor Craig Depken said graduates of the STEM-designated program are finding jobs in a wide variety of occupations and industries.

“Our curriculum provides students with the tools for economic analysis which can be applied in a wide range of areas, including economic development, education, medicine, logistics, sports, and politics, to name a few,” Depken said.

After earning a bachelor's in economics, Viars found a job but was quickly disillusioned with cubicle life.

“I found out quickly that to do something impactful, I needed a master’s degree,” said Viars, who had good relationships with her professors, which played a major role in her decision to stay at the Belk College.

“Professor Depken helped me create my own academic path and choose courses that were purposeful,” Viars said.

It took a year to find her dream job, but Viars admits to being picky.

“I wanted a green or blue job, and they are harder to find,” Viars explained. “I used creativity in job search engines to look for roles requiring forecasting and analytic skills but not necessarily a job with ‘economic forecasting’ in the title. It is a shout-out to my professors who taught us to network, build our resume and be visible.”

History of the M.S. in Economics

Thirty years ago, as information technology was beginning to transform the field of economics, the M.S. in Economics program launched.

Young Davis, chair of the Department of Economics at the time, conceived of the program, said Ted Amato, professor of economics and the first program director.

“Young's perception was that the Charlotte metropolitan area was ready for a master's program in economics, both from the standpoint of opportunity for good placements as well as the pool of qualified potential students,” Amato said.

Richard Neel, who was dean of the Belk College then, was supportive of the initiative and took Amato to meet with dozens of business leaders to generate interest in the program.

“Meeting one-on-one with so many business leaders with Dean Neel was a huge investment in the program's success,” Amato said. “We got some interest from the business community and enrolled some part-time students during those early years.”

At the beginning, two required courses that were created in response to increased computing technology – econometrics and economic forecasting – set the program apart.

Amato said the graduate program grew again in 2007 with the transition of courses to the evenings, helping to better accommodate working professionals.

UNC Charlotte’s location in the second-largest banking center in the nation has helped to pave the way to success for many graduates. Over the years, graduates have found careers in banking, forecasting, auditing, financial analytics, law, and other traditional sectors. Others headed for careers in academia.

Read more about the 30th anniversary of the M.S. in Economics.