Anthropologist to discuss children of the Marshall Islands 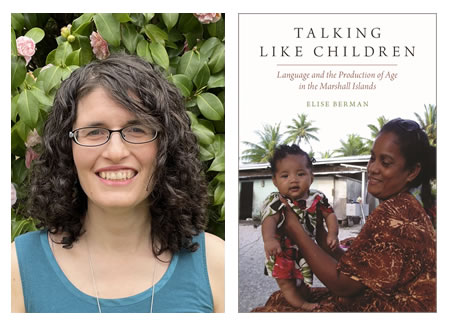 UNC Charlotte researcher Elise Berman will discuss a series of captivating stories about everyday life in a small village on an atoll in the Pacific Ocean for the second installment of the 2021-22 Personally Speaking lecture series.

Her talk, scheduled for 7 p.m., Tuesday, Oct. 26, will focus on how children learn to talk like children, as people who are different from adults. Her book, “Talking Like Children: Language and the Production of Age in the Marshall Islands,” examines how age differences emerge through the decisions people make, the emotions they feel, the things that they say and the power they gain.

Berman is an associate professor in the Department of Anthropology and first visited the Marshall Islands in 2003, working as an English and math teacher. She has returned repeatedly since then and is now working on a project with Marshallese communities in the United States. She also is studying migration to the New South and linguistic inequality in schools and recently published on this topic. Her research focuses generally on the politics of language and exchange, socialization and racialization, with an examination of children’s cultures, language, lying, socialization and age. She has worked with and studied ultra-Orthodox Jews, K’iche’ Maya and Marshall Islanders.

Now in its 12th season, the Personally Speaking lecture series offers the community an opportunity to hear published experts from the College of Liberal Arts & Sciences (CLAS) and participate in a question-and-answer period. Each event is designed to stimulate conversation with researchers around topics that are interesting and relevant.

The Oct. 26 presentation will be offered virtually and a Zoom link will be provided shortly before the event. Online registration is requested.

The Personally Speaking website, has more details about the remaining talks scheduled for the series: