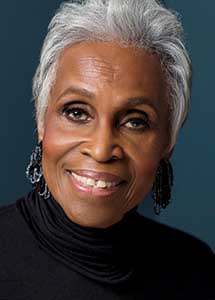 Dorothy B. Gilliam is the featured speaker for UNC Charlotte’s annual celebration of Martin Luther King Jr. The MLK Celebration, which will be held virtually for the second straight year, takes place on Tuesday, Jan. 25, and is open to the public. Registration is required for the program, which begins at 3:30 p.m.

Gilliam is the former president of the National Association of Black Journalists, where she served from 1993-95. She also is a former fellow of the Freedom Forum at the Media Studies Center at Columbia University as well as at the Institute of Politics at the John F. Kennedy School of Government at Harvard University.

Gilliam is most well-known as the first Black reporter at the Washington Post, where she started working in 1961. After leaving the newspaper later that decade to spend time with her family, she returned to the Post in 1972, ultimately working there for more than 30 years and eventually starting a column that focused on issues involving education, politics and race.

“Dorothy Gillam brings a really unique story being the first Black woman to be hired at the Washington Post. I think her experience and wisdom will bring a lot to the community,” said Kim Turner, director for the Office of Identity, Equity and Engagement, which hosts the University’s annual MLK Celebration. “Quite a few individuals were on our list as potential speakers, but I don't think we've heard from someone who was actually alive and really interactive during the civil rights era.”

In recent years, Gilliam has been honored for her life’s work, earning a Lifetime Achievement Award from the Post in 2010 and the Foremother Lifetime Achievement Award by the National Center for Health Research in 2019, which goes to “women who expanded women’s horizons, improved our communities and made remarkable contributions to our country,” according to a NCHR release.

Gilliam also wrote a memoir, “Trailblazer: A Pioneering Journalist's Fight to Make the Media Look More Like America,” which was published in January 2019.

Turner said she is excited to listen to Gilliam, who turned 85 in November, and hear her outlook on key topics surrounding race after a 50-year career in journalism.

"I’m looking forward to hearing her experience and if she has any advice to give from an advocate's perspective,” Turner said. “She was a really big advocate during her time, so I’m interested to hear if she has any advice in regard to civil rights and social change as well as whether she sees many differences between the 1960s and now. I think that some people would say that there's been some change, but not a lot. I'm really looking forward to hearing her insights."

Wyatt Crosher is a communications coordinator for the Office of Student Affairs.