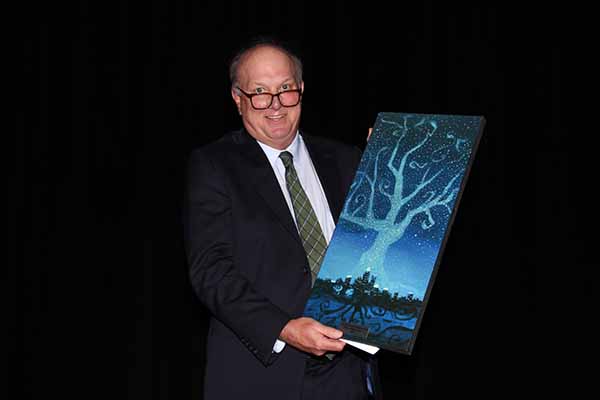 Niles Sorensen is the 2022 Outstanding Fundraising Executive Award recipient as presented by the Association of Fundraising Professionals’ Charlotte Chapter at its National Philanthropy Day luncheon held at the Hilton Charlotte Uptown Thursday, Nov. 10.

Sorensen, who will retire at the end of December, was honored for his four-decade fundraising career, including 16 years working to strengthen UNC Charlotte’s visibility and support in the region. Among his many accomplishments as vice chancellor for the Division of University Advancement were the creation of the prestigious Levine Scholars Program; the completion of the largest capital campaign in the University’s history, which raised more than $218 million; and the update of the University brand.

“Niles’ hard work and dedication to fundraising have helped the University reach new heights and exceed extraordinary fundraising goals,” said Chancellor Sharon L. Gaber. “Through the vision and work of University leaders like Niles, we are well-positioned to continue an upward trajectory of external support.”

Sorenson was critical to developing and overseeing the completion of the UNC Charlotte Marriott Hotel & Conference Center, which is an example of the University’s growth and commitment to playing a significant role in the Charlotte region’s economy.

The University recently named the lobby space in the hotel the Sorensen Conference Center Lobby to further recognize his contributions to the campus, to students and the city.

“It is an honor to be recognized by the AFP for what's now a pretty long career,” said Sorensen. “The success that I've had and that the University has had have been built upon the commitment of volunteers and donors. I just help people get it done."

Photo: Niles Sorensen celebrates the naming of the hotel and conference center lobby in his honor with his son John, right, Chancellor Sharon L. Gaber and Gene Johnson ’73, former chair of the UNC Charlotte Board of Trustees.