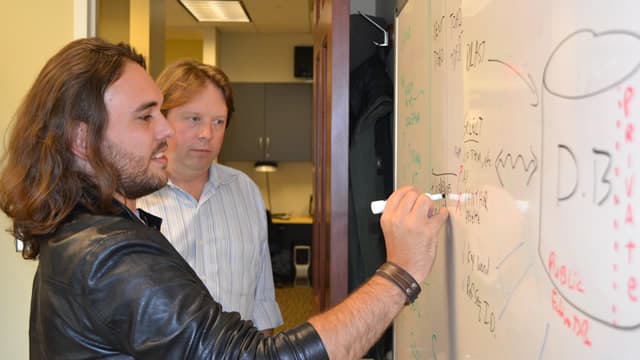 Two researchers from Brazil are working with Daniel Janies, the Carol Grotnes Belk Distinguished Professor of Bioinformatics and Genomics, to better understand the genes that allow amphibians to generate and resist the poisons they use for defense.

Graduate student Denis Jacob Machado from the University of São Paulo (USP), Brazil, and his advisor Taran Grant are spending the next year working with Janies. The two received a “BEPE” (Bolsa Estágio de Pesquisa no Exterior) Research Internship Abroad award to support this student exchange from the São Paulo Research Foundation (FAPESP).

According to the researchers, they want to identify the genes that allow amphibians to accumulate and resist the poisons they use to defend themselves against pathogens, parasites and predators. Brazil’s Maldonado Redbelly Toad is a species of interest, along with South American dart poison frogs and the North American rough-skin newt. In partnering with Janies, the researchers have as a goal to acquire specialized knowledge on comparative genomics, animal evolution and bioinformatics analysis. Janies is an expert in the study and use of genomic data, especially large DNA data sets available at UNC Charlotte.

“I am a mix of zoologist, phylogeneticist and bioinformatician,” explained graduate student Machado. “Applying next-generation sequencing technology to understand the evolution of chemical defenses in amphibians is very exciting to me because it combines these three disciplines and more. Dr. Grant and his team have great knowledge on amphibians and their evolution, but zoology is still lagging behind the cutting edge of bioinformatics research. I’ve come to Dr. Janies’ lab at UNC Charlotte to learn the latest techniques and apply them in our research. I believe it would be very hard to find a better place to do so. I am very happy and honored to be working with this amazing team of researchers.”

Janies, who also is director of global research collaborations for the UNC Charlotte Graduate School, explained that this collaboration is part of a larger relationship between the University and the São Paulo Research Foundation (FAPESP) in which the Graduate School has invested in joint work in genetics, chemistry and biology in an effort to understand how natural products in biodiversity can be used to fight diseases, such as cancer. The São Paulo Researchers in International Collaboration (SPRINT) is a program designed to encourage and promote the advancement of scientific research through the engagement of researchers affiliated with research institutions in the State of São Paulo with researcher partners abroad.

According to Machado, all amphibians have toxins as part of their innate immune system and defensive mechanisms against predators. Some frogs, like the Maldonado Redbelly Toad or the Blue Poison Frog and related species on display at the North Carolina Zoo, are able to sequester special kinds of toxins (lipophilic alkaloids) from ants and mites on which the frogs prey.

Lipophilic alkaloids are neurotoxins that act on ion channels, blocking communication between nerve cells. Originally discovered in dart poison frogs, these alkaloids are now known in mantellid frogs of Madagascar, certain myobatrachid frogs of Australia and certain bufonid toads of South America and a small group of eleutherodactylid rain frogs from Cuba.

“In the long run, we want to understand how different families of frogs independently evolved the ability to sequester and resist toxins,” Machado stated.  “We are among the pioneers in this area of research, and we have much work ahead, but the collaboration between USP and UNC Charlotte is a great first step.”

Although Machado’s research is focused on the evolution of amphibian defensive chemicals, several species are known to have some kind of medicinal value. In the case of the dietary alkaloids found in poison dart frogs, medical research is investigating if these poisons can be developed into muscle relaxants, anesthetics and heart stimulants. Some researchers argue that they could even become a better anesthetic than morphine.

Growing up in Três Lagoas, São Paulo, Machado spent his years in several small towns in the interior of São Paulo state, particularly Taquaritinga. He earned a bachelor’s degree in biological sciences, with special interest in marine biology from São Paulo State University (UNESP), followed by a master’s degree in zoology from the University of São Paulo (USP).

“I have always been interested in using computational methods to understand evolution,” he said. “Now, I am a Ph.D. student in the Inter-institutional Graduate Program in Bioinformatics at USP.  I am most interested in systematic theory and its applications in a wide range of fields, from taxonomy to functional genomics.  My current research project focuses on the comparative genomics and evolution of chemical defense in poison frogs.”

The SPRINT and BEPE programs are designed to encourage and promote the advancement of scientific research through the engagement of researchers affiliated with research institutions in the State of São Paulo with researcher partners abroad. UNC Charlotte’s Graduate School is a FAPESP partner. Together, the organizations aim to provide funding for international research collaborations via funding lines from FAPESP.  As Brazil’s largest GDP contributor, the state of São Paulo generates impressive funding for research that is administered by FAPESP.  In 2014, FAPESP’s disbursements reached the equivalent of $390 million dollars (U.S.).

“The work of the scientists from Brazil is funded by FAPESP, and the work of scientists from UNC Charlotte is funded by the Graduate School,” explained Janies. “Thus scientists are bringing their own institution’s resources to leverage the unique strengths of Charlotte, N.C., and São Paulo, Brazil, toward the common goals of improving health and understanding biodiversity.”